Kyrgyzstan was like a dream come true. Mountains in view instead of flat plains, rivers instead of desert and horses rather than camels. There seemed to be so much life here. To say I was excited was an understatement. 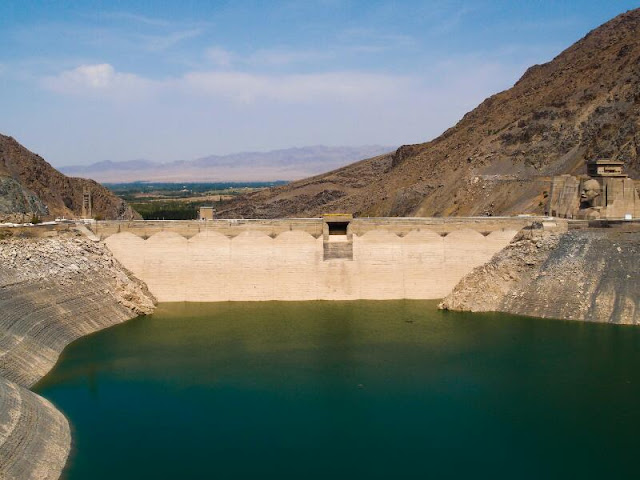 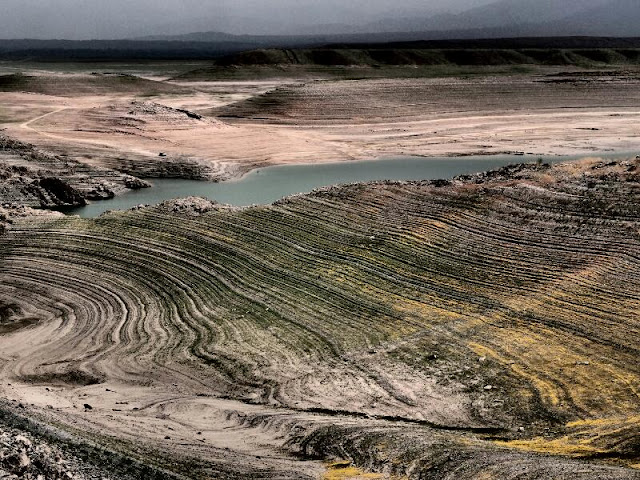 One of the first things people talk about when crossing any of the borders into Kyrgyzstan, are the horses. There are so many of them. Children as young as 6 years old have already mastered the handling of these beasts and love to show of by racing weak bicycle tourists. I kept wishing for a Go Pro to capture these amazing moments, but they will be imprinted in my memories instead. 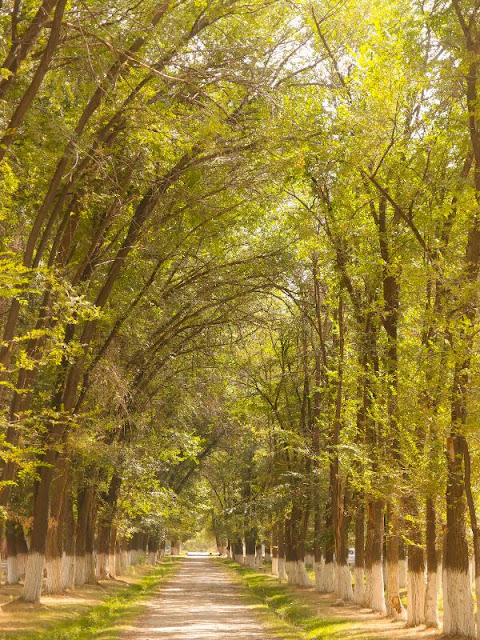 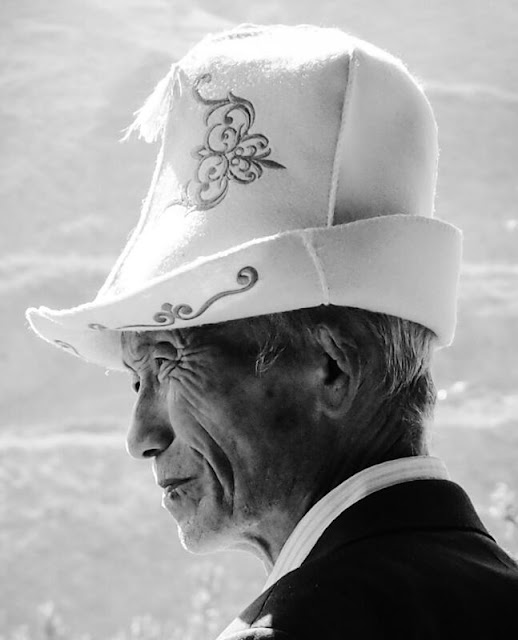 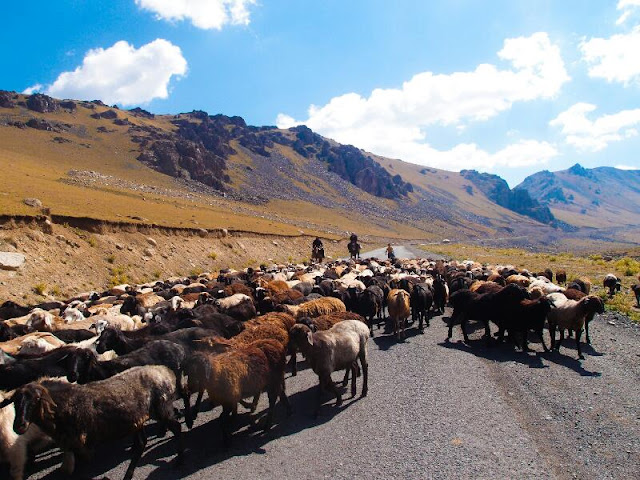 Finding water to camp next to in Kyrgyzstan is no problem at all. The only skill is finding a nice quiet spot where you won’t get bothered. Getting bothered means entertaining the vodka drinkers. Kyrgyzstan, it transpires, is another country where vodka is drunk ferociously. It was starting to get dark, so I found a nice spot by a small river. I washed myself, got dinner on and then the party van came along. Out steps an impossibly drunk man of about 45 years. He proceeds to empty his bladder half a metre from where I was cooking, tells me my food is shit but then eats it, all the while he’s staring me out with these demonic eyes. I quickly finish the rice that hasn’t fallen out of his mouth and I decide to move on. My new “friend” FINALLY gets the hint and starts hobbling off with a belly full of my food, he obviously didn’t eat enough to soak up the alcohol though. As he zig zagged away I took great pleasure in watching him face plant into the ground, his reactions were too slow to extend his hands and he lay in a heap for a good few minutes. Drunk man – 0, Cyclist – 1. 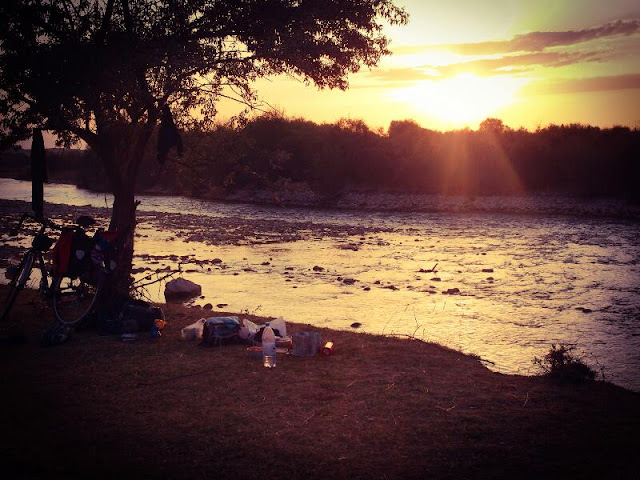 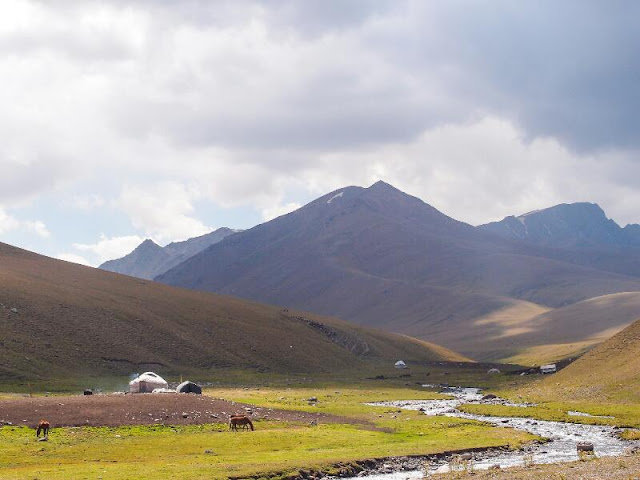 After this encounter, I wanted to find a place fast where I definitely wouldn’t get hassled. The top of a hill looked good. I had been told to expect every kind of weather in Kyrgyzstan, but I forgot about this while myself and my tent were perched on an exposed hillock at 1600 metres. The wind didn’t start strong, but by about 9pm the lacklustre tent pegs were flying out of their homes and my home was feeling increasingly compromised. When I pitched the tent I had taken the wind into consideration, but at some point it changed and I was being pushed from all angles. The rain followed and I was forced to tentatively re-peg the tent in my boxers. Not fun, but the stars were nice and I eventually got some sleep. 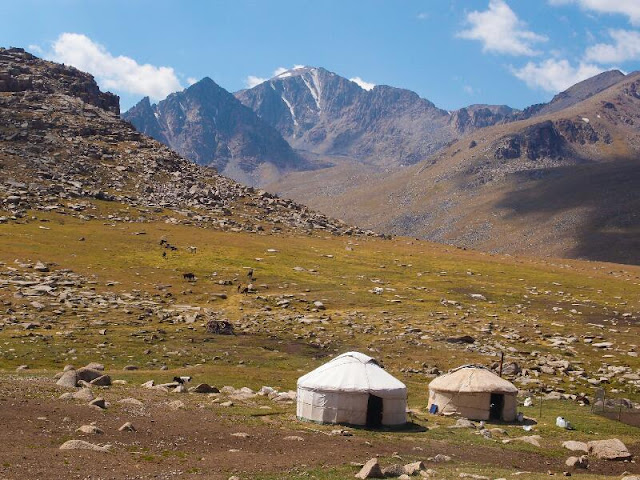 Many of the children were happy to see me, some were confused and others just seemed depressed. It was odd seeing 8 year old kids who had worried faces, like the whole world was on their  shoulders. I wondered what they were so concerned about, but I guess life in rural Kyrgyzstan could be pretty tough. 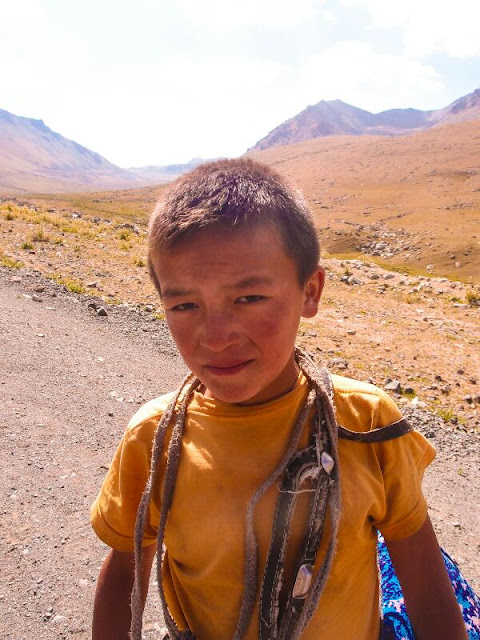 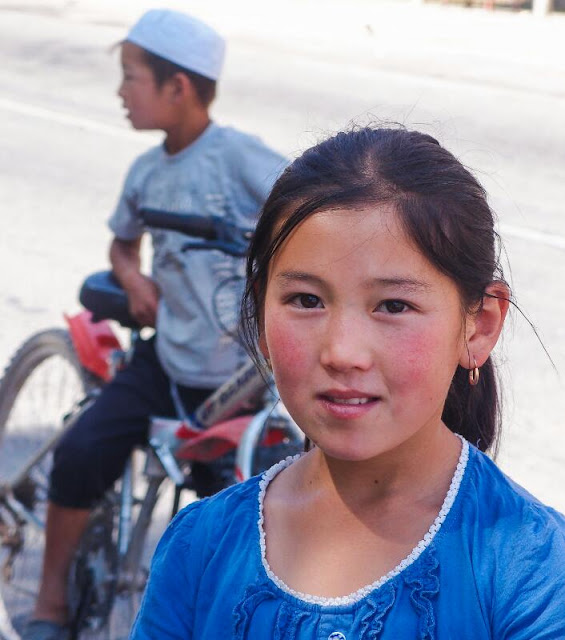 I wanted to take a smaller road south to Osh, but unfortunately the only ATM I could find didn’t accept Mastercard and with no money changers I needed to continue along the busier road. I eventually changed some money and celebrated by eating food and using the Internet. Kyrgyzstan is home to many dreadful drivers. There was enough space for us all to be happy, but I was repeatedly pushed into the dirt with a deafening horn for company. These men are warriors and giving room to a cyclist must be seen as a sign of weakness, or something. 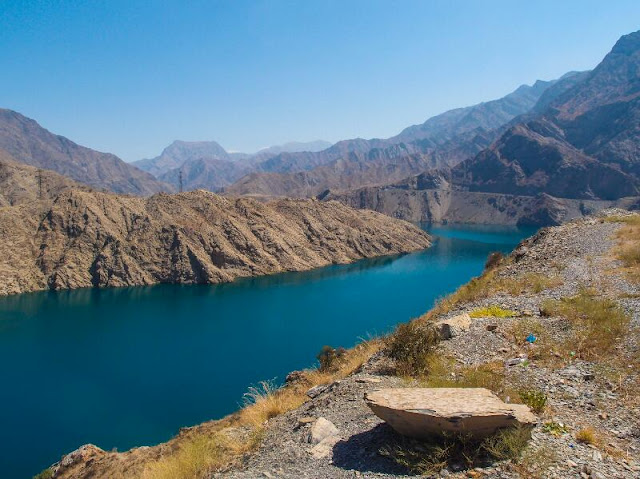 I was pushing myself really hard. With a specific date on my Tajikistan visa and weeks before it started, I had no where to be and lots of spare time. Still, I had my eyes set on Osh and decided to get there fast, just for the challenge and the enjoyment of being exhausted. 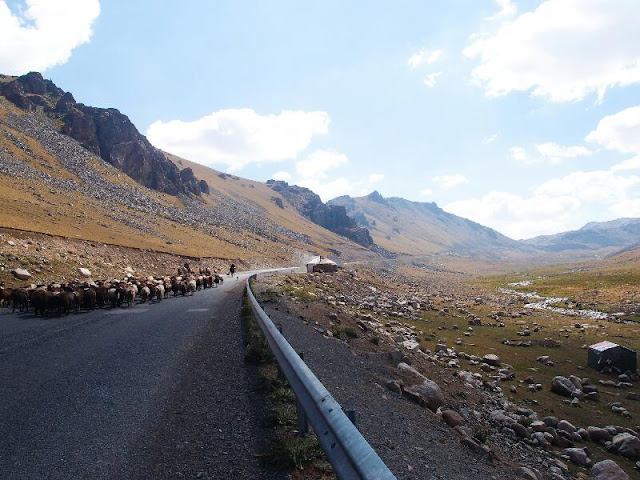 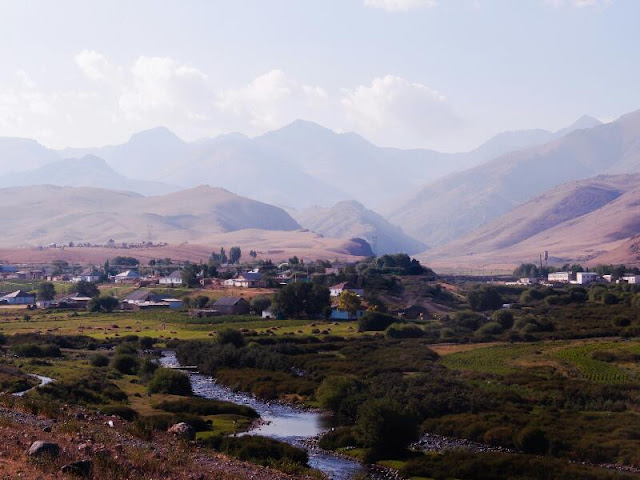 When I joined the main road that connects Bishkek and Osh, I expected a steady stream of cyclists either heading in the direction of Tajikistan or coming from the Pamirs, this wasn’t the case. It seems many of the people who cycle the Pamirs, just come for that road and not, like I assumed, as part of a longer trip. I was very impressed with the road though. The surface was almost immaculate and the scenery was often breathtaking. You were made to work for it though – just what I like. 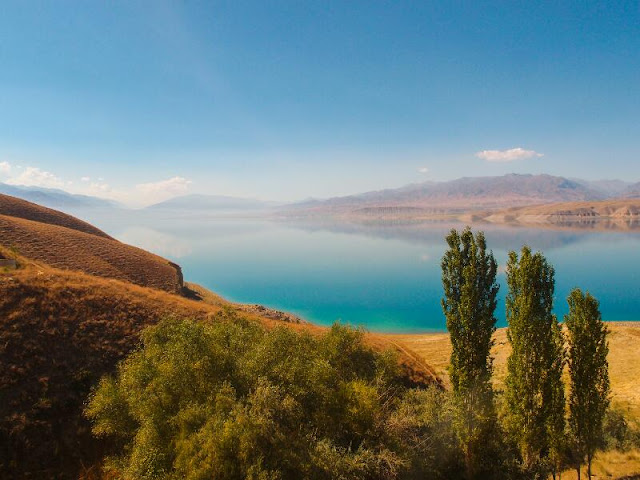 Never let it be said the kyrgyz people don’t know what impromptu humour is. A car driving towards me, the passenger waves like crazy, so I return the wave, he gives me the middle finger… Funny. As I’m taking a picture of a beautiful landscape, a car comes past and out of the window someone shouts “oi” right as I’m about to snap the shot, almost making me drop the camera… Hilarious! 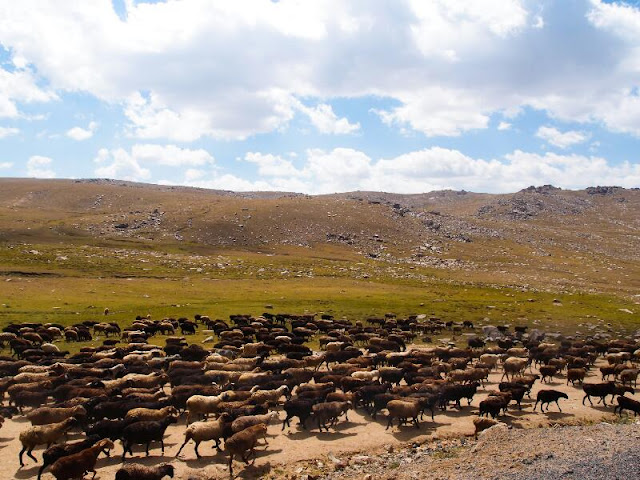 I try my best to talk with everyone. If someone waves me to stop, I normally do, especially when cycling alone. Usually the conversation is brief, “where are you from?”, “where are you going?” etc etc. But you never know where it could lead, today it proved a good tactic. I was refilling my water bottles (I have for 5 now), when I was called over to a cafe by an elderly couple. They were driving home from Bishkek and seemed to know everyone in this small town. With a combination of miniscule Russian and patchy Turkish, we had what you could generously call a conversation. We laughed, ate fish and drank some disgusting fizzy milk. Things must have gone well, as he invited me to camp in a hotel 25 km down the road. I rode like a drugged up Lance Armstrong and got there super quick. To my delight, I was given a room! Not a word of English spoken and just a handwritten note from this man I met to decipher, a very fine result indeed and all for free. It was called a hotel but really it was just a few rooms above a cafe, it definitely felt seedy but beggars can’t be choosers. I went to bed early, happy with myself. At around 3 am I awoke to what I thought was an earthquake… Women screaming and the whole hotel was shaking. After a few seconds I realised what was going on, I had been given a free room in a brothel. I never met the man again so I can only assume he owns the place, or he’s their number one customer. 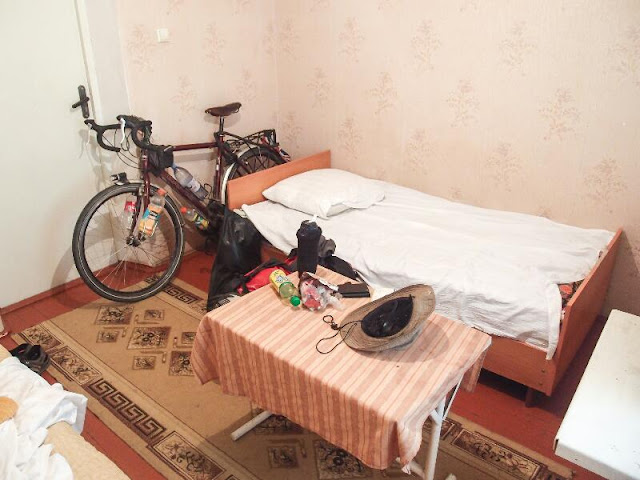 I was bored of just eating bread for lunch, so when I came across a watermelon stand I was happy to have variety. I asked for a small one and was given a monster weighing about 4kg. It cost about 40 English pence but I wasn’t about to waste any. I sat there for the next 2 hours munching away until I was too sick to move. Money well spent but I’ll be laying off the watermelons for a while. 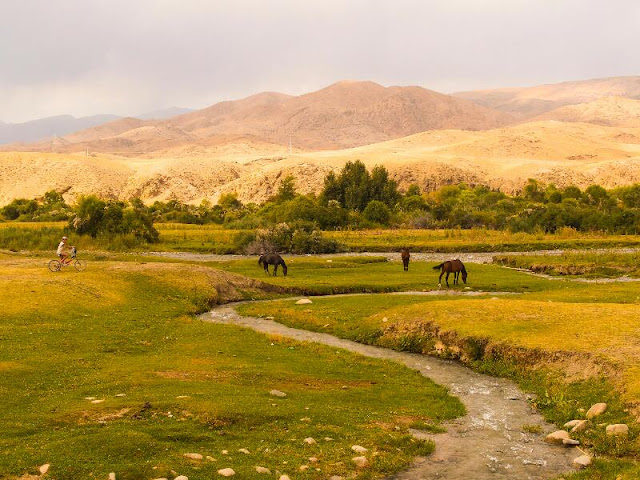 And then there was Osh. All the cyclists say the same thing “stay in Biy Ordo hotel”. It was a great shout. On the day I arrived so did a selection of crazy travellers ready for some fun. 3 days of vodka, dancing, dressing up as women, making a human spank train and other debauchery. It was so much fun with some great characters. 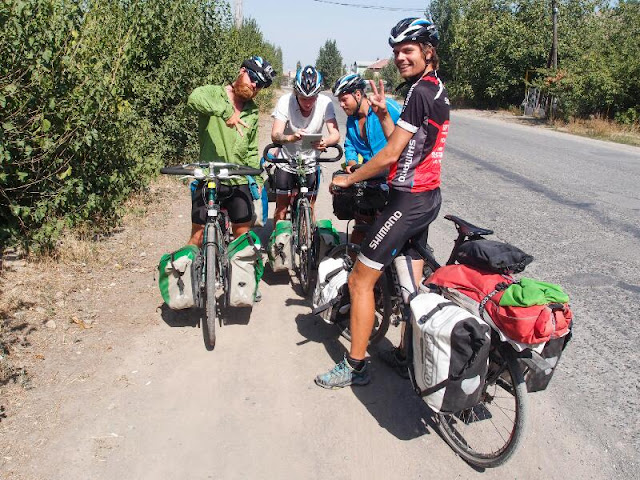 Among this group were four Swedish guys cycling to Thailand for charity. I still had so much time to spare before I could enter Tajikistan (very poor planning on my part), so I decided to join them to the Chinese border. Logically this made no sense at all, I would cycle 240km with three passes over 3500 metres then cycle the same road back again. Things don’t have to make sense and I liked the idea that on a bicycle, you’re never cycling backwards but always forwards. It was loads of fun pushing hard with the Swedes, climbing huge passes and plenty of smiles while doing it. 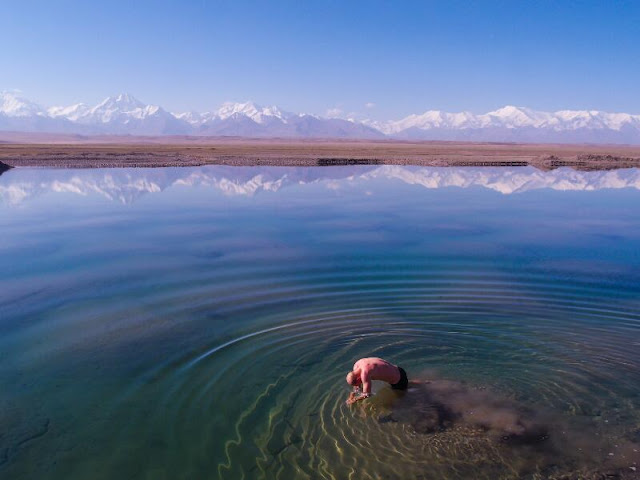 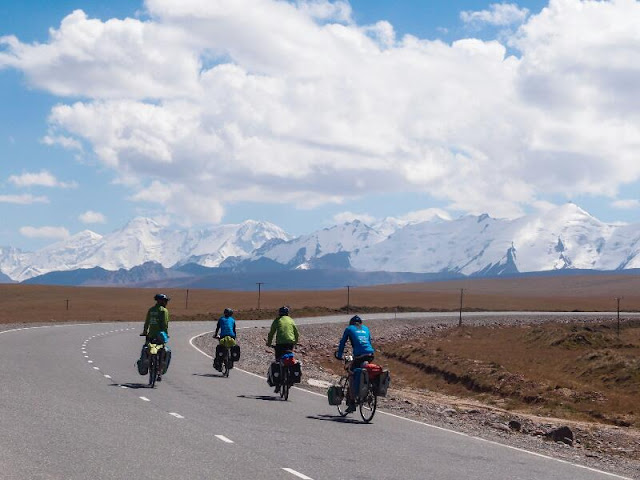 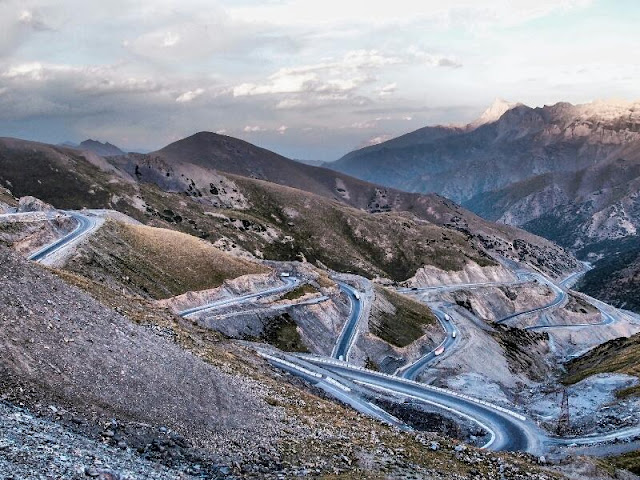 On the way back I considered hitchhiking but met a cool Dutch couple and couldn’t resist the temptation of making new friends. Thankfully the road back from Sary Tash to Osh was so much easier than the way there, that turned out to be a relief for my legs. 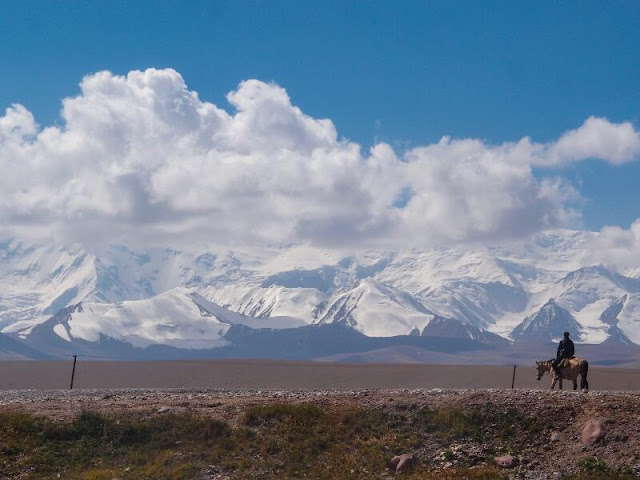 Back to the amazing guesthouse with fewer friends but still some travellers to keep me company. Tomorrow I’ll start heading West through the volatile Ferghana Valley with the craziest enclaves I’ve ever seen on a map. According to Google maps you need to enter Uzbekistan a few times to reach Tajikistan but I’m hoping this isn’t the case as I don’t have a visa. I might be dragging my bike around the borders but I’m assured there is a way. Exciting times and even more exciting will be the reunion with Mark and plenty more laughs. Bring on the good times.