For the past 5 days in Istanbul I’ve been living like a local, staying in a neighbourhood not usually frequented by tourists and eating at the local restaurants and kebab houses... perfect. I’ve been staying with a Syrian guy named Ghazwan who has been living in Istanbul for the past 10 months. His flat has become my own and the comfort has been much needed to help shelter me from snow, wind and rain. According to Wikipedia Istanbul actually has higher annual average rainfall rate than London. QI.

Istanbul extends over 2 continents, separated by the Bophorus straight which links 2 different seas together, the Black Sea and Marmara sea. This makes the location of Istanbul fairly unique. From my neighbourhood on the Asian side a boat is required to travel to Europe, 60p and 15 minutes later and you're there.

Istanbul is famous for Mosques but after a few they all start the look the same, until Hagia Sophia.  When it was built in the year 532 Hagia Sophia was originally a church, it was converted into a Mosque in 1453 when the Ottoman Empire laid siege to Constantinople.  The whole building is stunning and anyone with a vague interest in churches, mosaics or interesting architecture should definitely check it out. 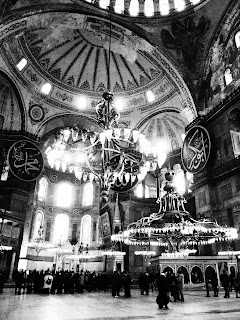 My expectations have totally been smashed by Istanbul, the Turkish have definitely lived up to their reputation for being hospitable and friendly people. This country is now fully on my list of places to explore further; apparently hitch hiking is popular and easy so maybe that could be a plan.