Dushanbe is famous for two things; being the capital of Tajikistan and the warm showers host, Veronique. The legend of Veronique is told by cyclists on all approaching roads leading to Dushanbe. As the only host here, Veronique must be inundated with requests, but it’s seems there is always more tent space in the garden. Along with a never ending rotation of cyclists, is Gabriel, Veronique’s energetic son and an African parrot that can time a manic laugh to such perfection it has everyone in stitches. 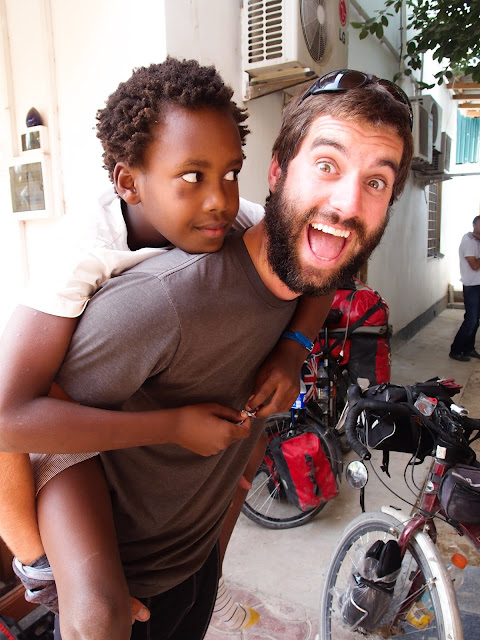 My time here was spent drinking beer, eating delicious food, thinking about cleaning my bike and chatting with simply awesome people. To everyone who I met and especially Veronique herself, thank you so much. A truly unique place. 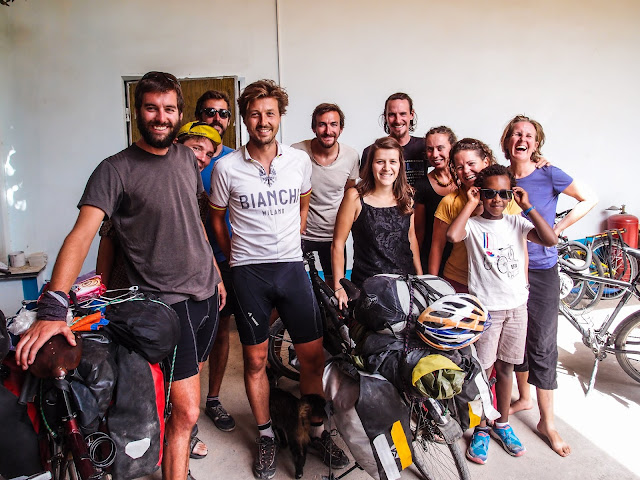 I could have easily stayed longer but the winter is fast approaching and unfortunately, visas don’t last forever. A super cycle touring team of 4 idiots left together, there was Mark the Cycling Sausage, Daan the Barber, Mr Romantic the Honey Monster and myself. My rack was still broken, so I had a £3 piece of crappy steel tied to my bike in an emergency. It would have to be quite an emergency as I reckon the only use for this piece of steel would be a toothpick, even then it would probably break. 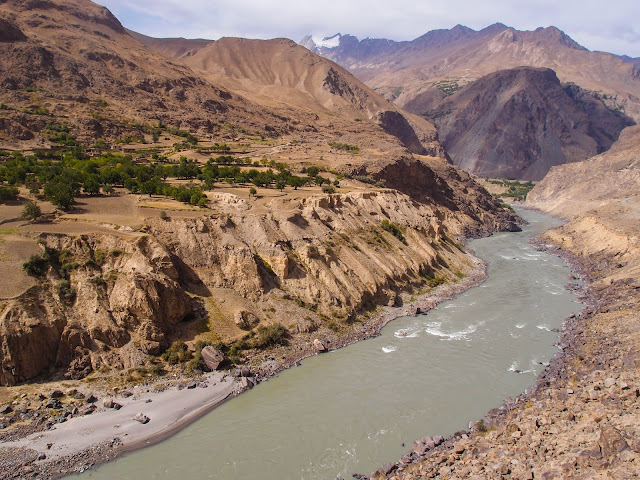 We made it an entire 5km before the problems started. At this point a special mention is deserved for the drivers of Tajikistan, you are shit. If you can drive 10 metres and aggressively stop, you pass your driving test with flying colours it seems. We were trying our best to avoid these abysmal drivers, when a fool of man decided to pull out in front of me. Just as I looked left to move out he slammed on his brakes and I crashed into his bumper. My anger was short lived as Mark had crashed into Romain behind me while drinking a milkshake, causing a very amusing milky mess.

We eventually made it out of Dushanbe... for a capital city there are not many roads. Cycling two by two on the quieter roads isn’t normally an issue. But some comedian obviously saw this as their divine moment. A hand reached out from a fast moving car and some guy spanked my bottom, really hard. I take my hat off to that man, it was a fine shot. Well played. 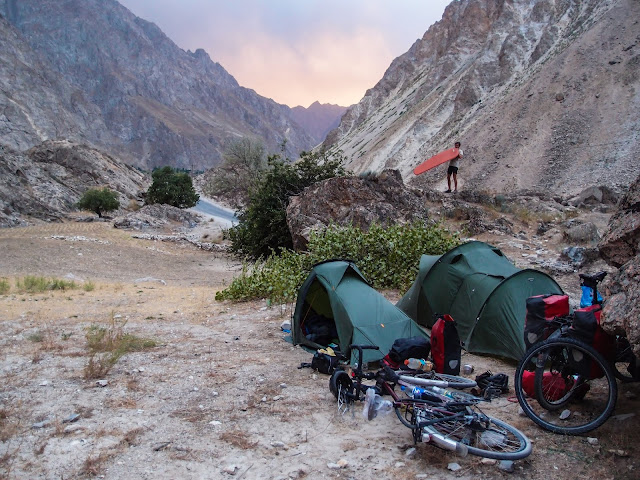 After about 30km we had to make a route choice. The easier but slightly longer southern road, or the rougher and more beautiful north. It’s no surprise four testosterone filled boys chose the hard way, and a great choice it was. 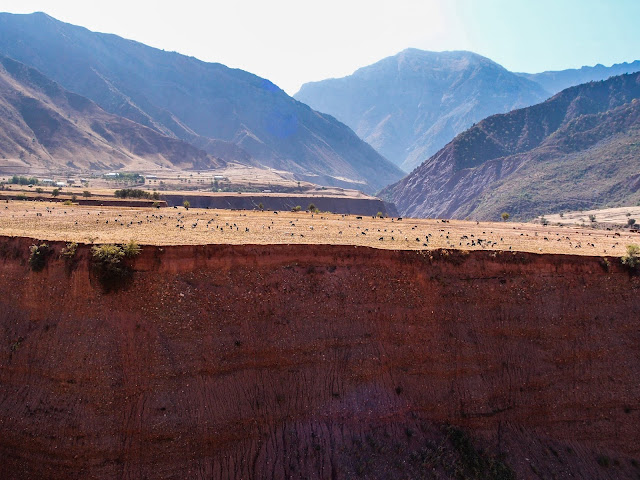 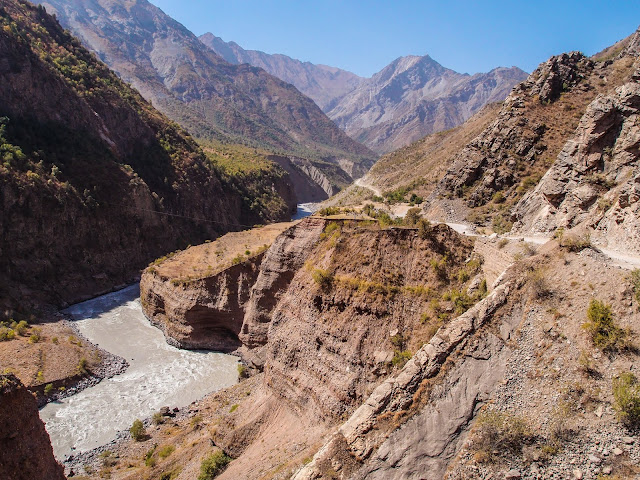 There was, however, a serious trade off between beauty and bicycle destruction. Here’s how it went…
Day one: 2 punctures for Mr Romantic
Day two: a broken gear cable also for the French man
Day three: a puncture and my rack starts to break again
Day four: my tyre pops out of the rim Daan the Barber has a puncture and a broken valve on a new tube
Day five: my rack snaps on the other side as well, it’s now held on by just 2 screws connected to the bike frame. 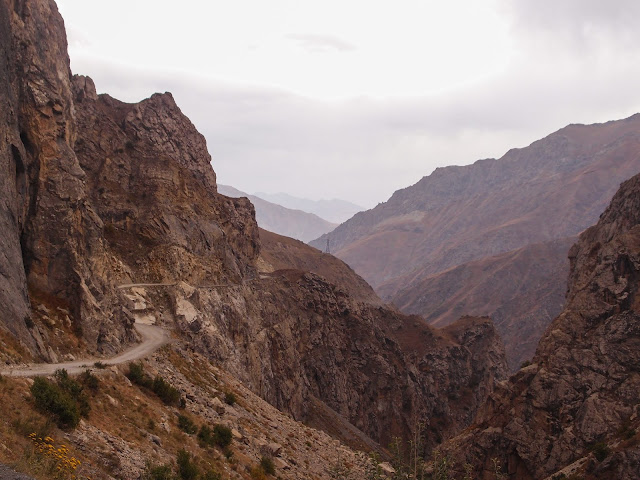 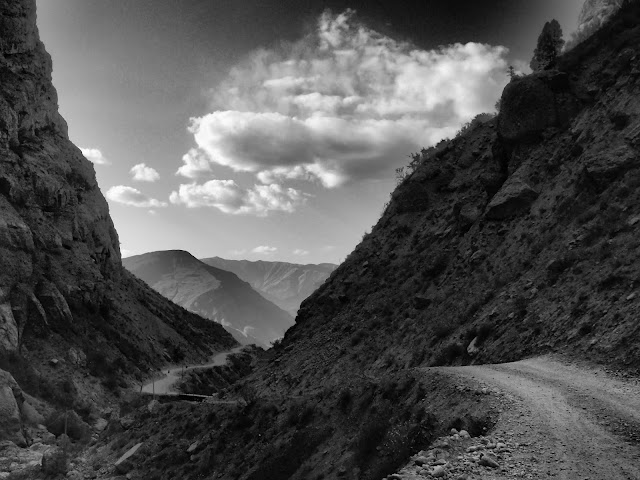 Passing through village after village, we were always met with the ‘hello rapists’ as I called them. Little kids who LOVE to say hello as many times as humanly possible. It sounds sweet, but these little ninjas add an extra level of difficulty to the obstacle course that is the Pamir Highway. One of the villages was like something out of The Shining. What seemed like hundreds of children lined the street manically waving and screaming “hello” with crazed eyes, even an old woman was waltzing down the street. There is nothing scarier than evil kids and crazy women… I cycled as fast as my little legs would take me. 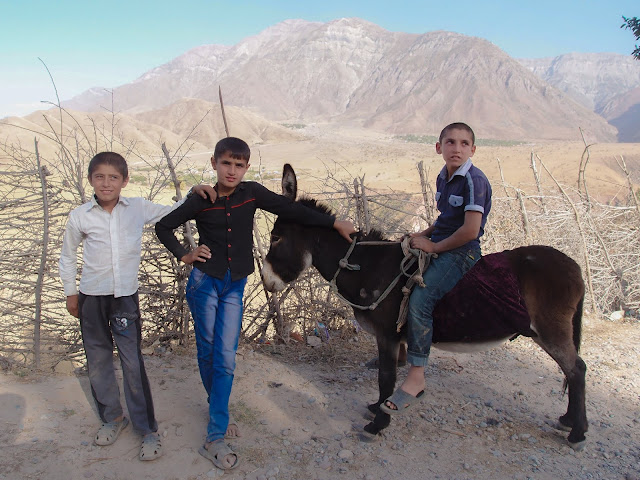 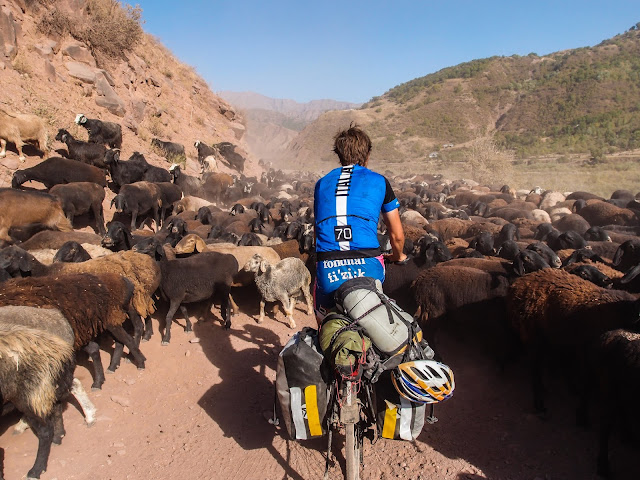 Without a doubt this section has been my favourite road on the entire trip. It’s rough, but so incredibly beautiful that every pot hole and bump is totally worth it. Most of the journey is through a deep valley with high mountains on either side and a meandering river in the middle. What makes this road so unique is that Afghanistan is on the other side of the river, just a stones throw away. We thought our road on the Tajik side was bad, it’s truly awful on the Afghan side. Carved into the mountain side, at times it doesn’t even look wide enough for a donkey. 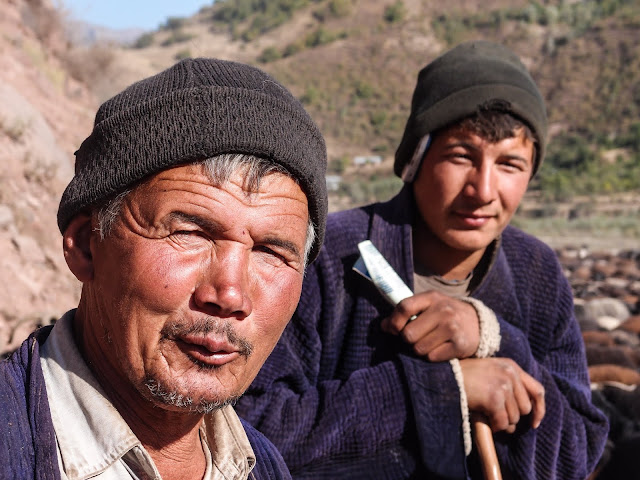 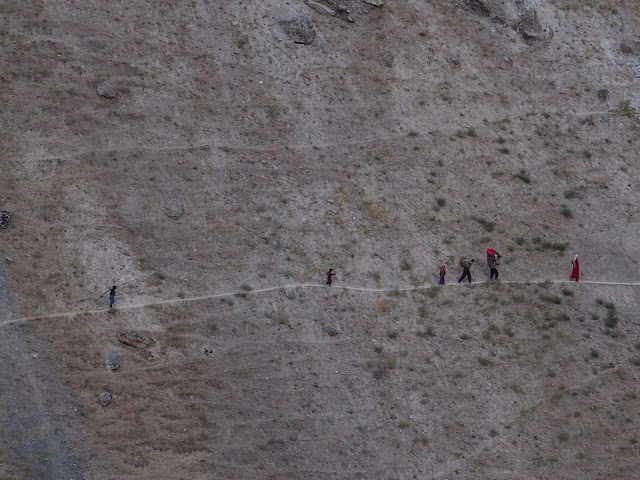 When an Afghan truck used the road, I just had to stop and watch in amazement. It’s not only trucks you can watch, vivid green villages with dancing kids shout from across the river. It’s a shame they have probably never had sweaty, hairy cycle tourists on their road. They might have been looking over at me with interest, I just kept looking at their flat green grass with jealously. It turns out there are not only terrorists in Afghanistan, there are also lovely wild camping spots. 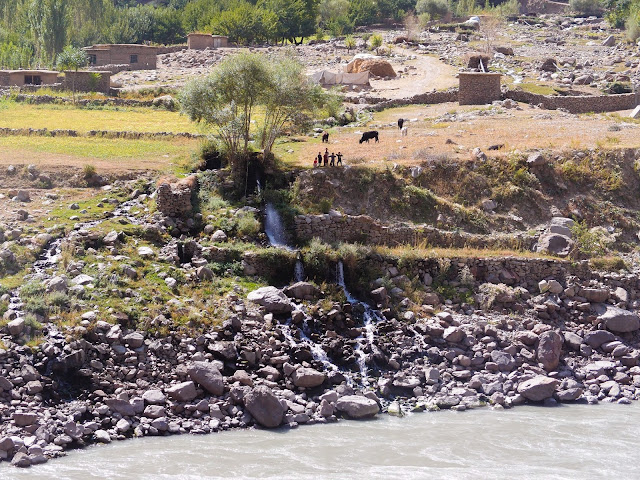 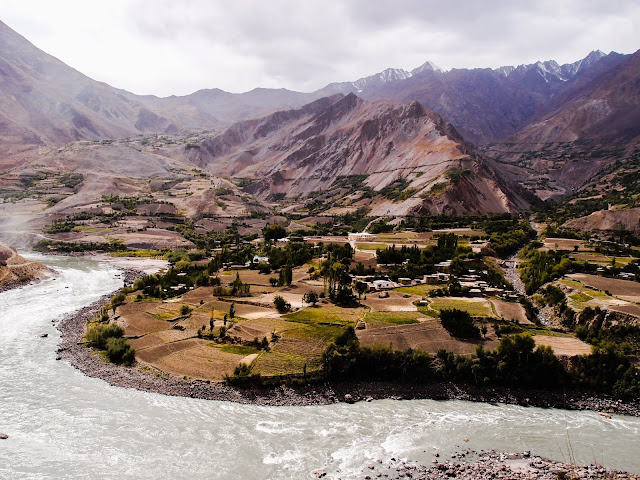 I had heard the legend of ‘The Tajikistan Tummy Tickle’. It’s like Delhi Belly, only in Tajikistan. In preparation I filtered all water and hoped for the best. Mr Romantic was the first soldier to fall. Fortunately, we were near a homestay, so we packed him off to get some rest. Unfortunately, the next morning as our tents were perched on a mountain far away from any accommodation, Daan was next. His bout of sickness started with a bang, and he was only able to pop his head out his inner tent and expunge his dinner into the porch. Bad times. 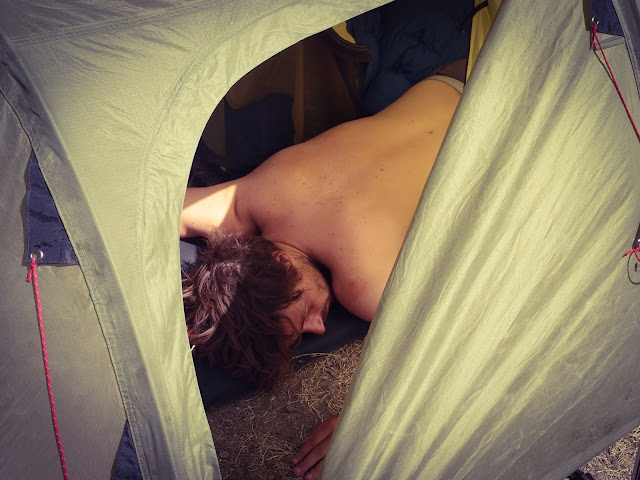 On the plus side I met up with some old friends from Osh in Kyrgyzstan, Tony and Kate. We knew we would bump into each other and had promised to share a pot of tea together. We met just at the right time and decided to set up camp, not only did we share tea but biscuits!! 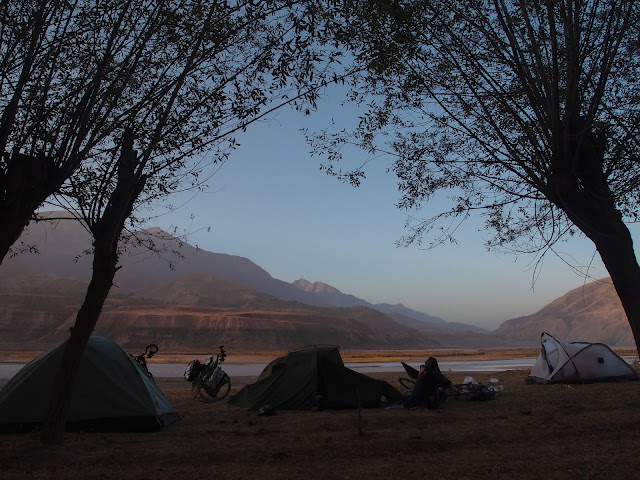 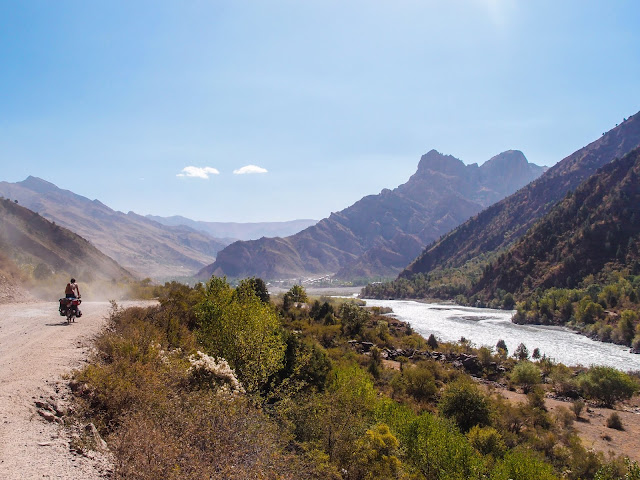 Unfortunately the boulder strewn roads and abundant potholes were too much for my fragile rack. I started with one side broken and then for the last 2 days, both sides were destroyed. Just have to keep going and hope for the best. 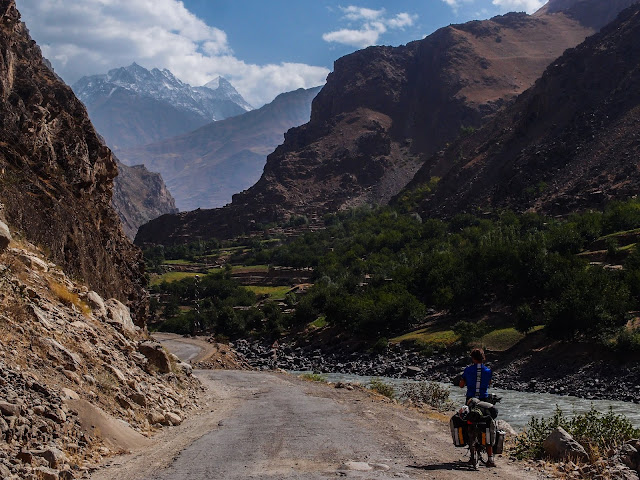 In the end only Sausage and I rode into Khorog together. The others had hitched to get better for the next, tougher section. Khorog is nothing special but a welder has made another attempt to fix my shit rack. Only 640km until the Kyrgyzstan border, then good roads await. Can Dave the Dawes make it?! 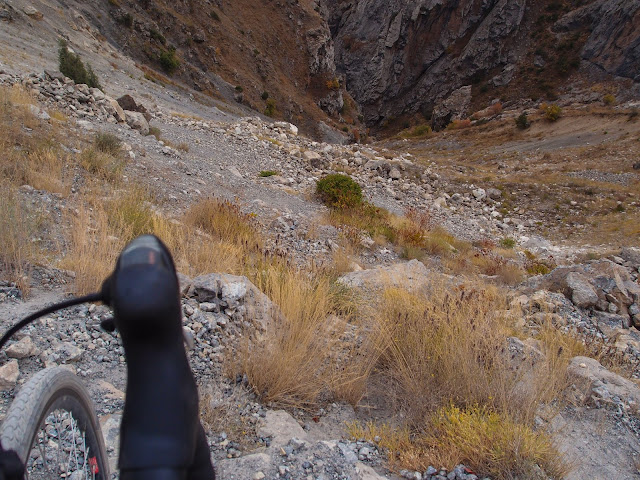 Our team is reunited and we can once again take the piss out of each other and laugh ourselves to sleep. The next section is going to be tough, without a doubt. A 4600 metre pass, snow storms and quite a few days at minus temperatures. My summer sleeping bag will get verbally abused, I’m sure. But pain is temporary… And so are fingers and toes. One thing I know for sure though, the four of us will be laughing all the way to Kyrgyzstan. Watch out Pamirs… We are coming for you!