Azerbaijan – a country full of surprises

A great send off from all the crazy people at Hostel Romantik. When I left Tbilisi their were 7 of us cycling to Baku; 4 Brits, 2 French and 1 Belgian. I haven’t cycled with this many since Serbia and the excitement levels were palpable. Navigating out of any capital city is hard, with 6 others it’s difficult, dangerous and at times, hilarious. The French ignored any rules and stuck their arms out to inform drivers they would be passing through a red light, we attempted to turn left across a busy junction, crossing 3 lanes of traffic and failed. We Brits stuck to our stereotype of politeness, waiting at each red light before catching up those pesky Europeans. 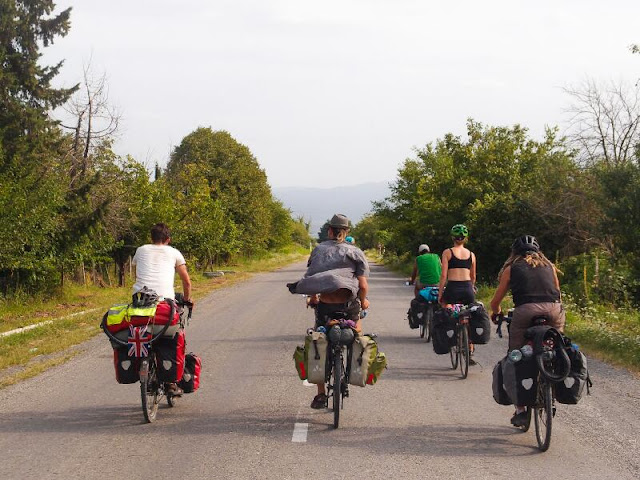 Progress through this last section of Georgia was slow, not due to the big group, although breaks significantly increase, but due to the terrible road surface. Bad roads are bitter sweet, they usually snake through gorgeous scenery and this was no exception. For 3 nights we found great camping, cool rivers to swim in, evening camp fires and some red wine. Georgia is an exceptional place for wild camping. 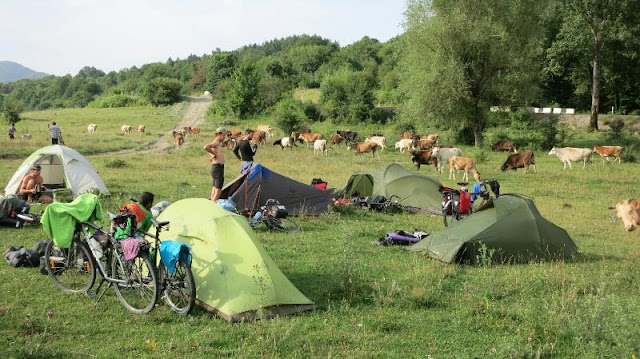 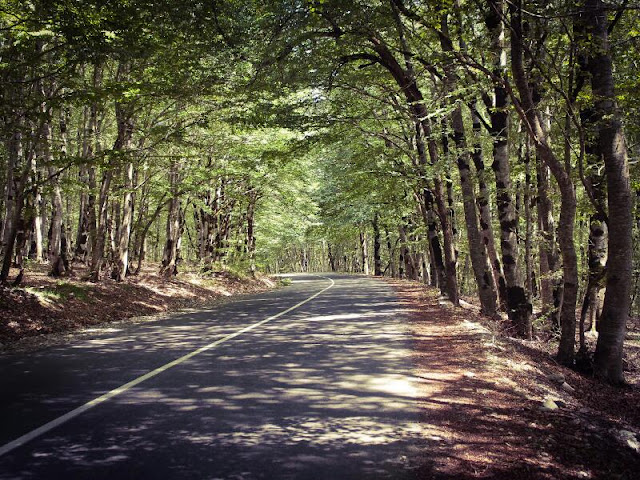 I was slightly nervous about leaving Georgia, I had an unpaid customs fine hanging over me and I was concerned it would show up as a red alert on my passport. Thankfully I exited with no problems, although if I ever return, I expect some problems. Hopefully by then I’ll be an millionaire. Somewhere along the way we lost 3 of our companions and now we were down to just the 4 Brits. 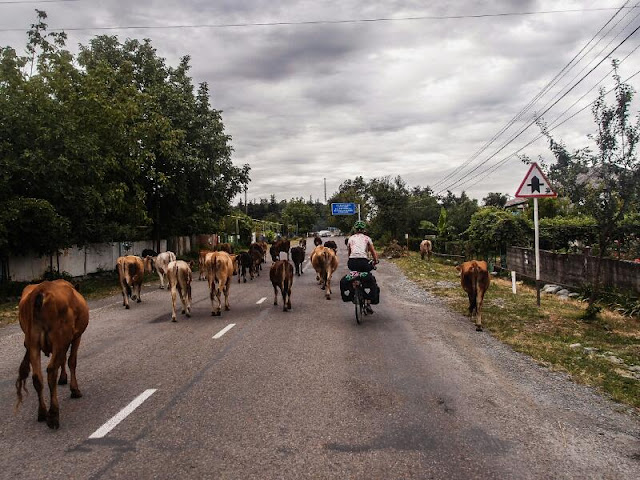 I had no expectations about Azerbaijan, it was never somewhere I have considered visiting. The visa is expensive and fairly difficult to obtain which puts many travellers off visiting. This might be the reason to explain why the Azeri people are so happy to see tourists. Turkey was crazy for curious locals but Azerbaijan is even crazier! I don’t think it’s an exaggeration to say in those first few days, every second car honked and all passengers waved furiously. By the end of the first day my waving arm started to tire. By the second day I had employed a Queen-esque flick of the wrist to conserve energy. That day I felt closer to the Queen of England than ever before, it’s tough work waving all day. 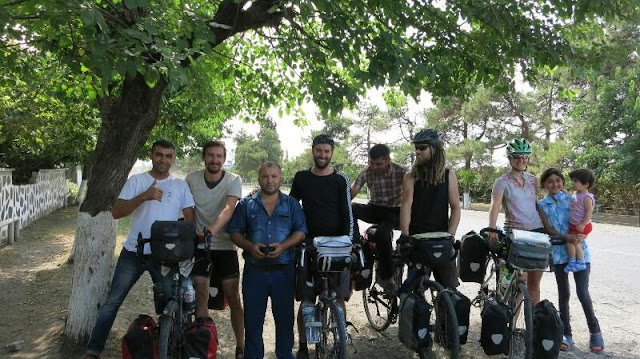 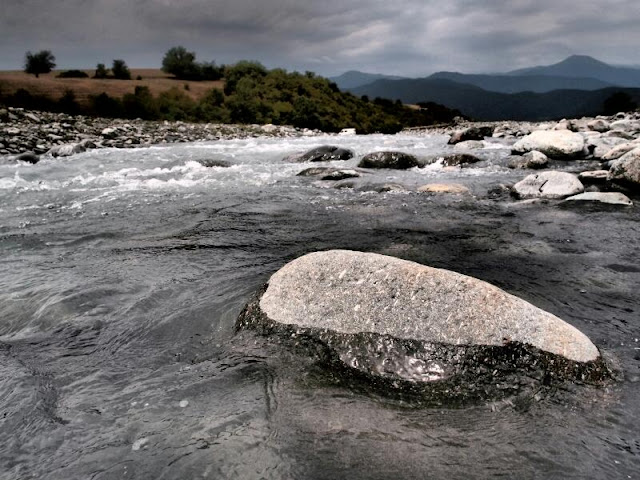 The enthusiasm people have shown toward us has been so genuine and often comical. The four of us were cycling over a one lane bridge, coming the other way were 2 cars full of people. We stopped to let them pass, they stopped to jump out of their vehicle and hug us and take pictures. It was so random, so unexpected and we left pissing ourselves wondering what just happened. 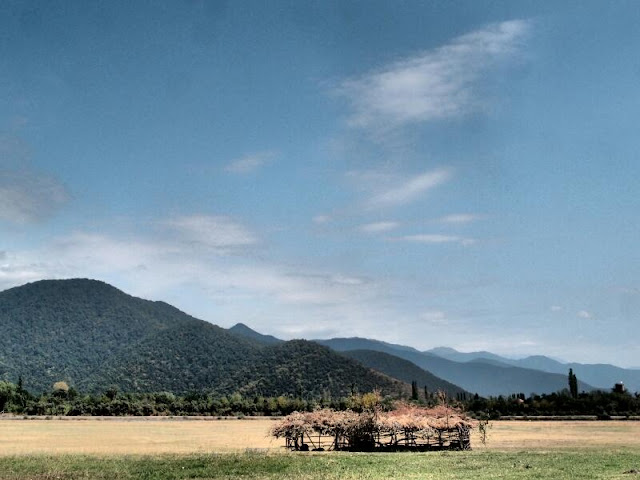 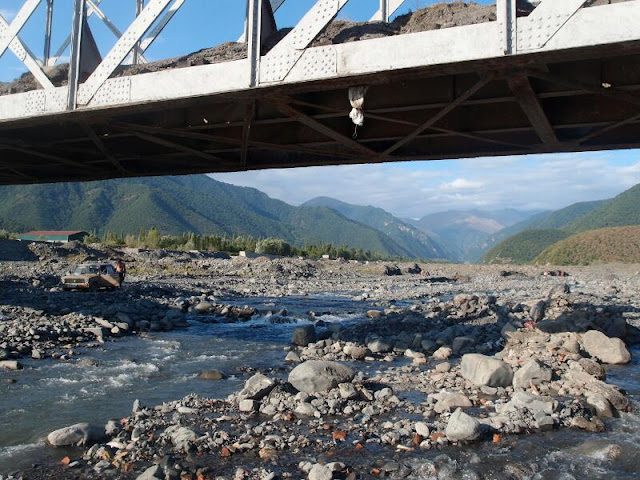 One essential thing for cycling in Azerbaijan is having space for all the food you’ll be given. Fruit and drinks will be generously handed over and finding a place to hang these gifts can get tricky. 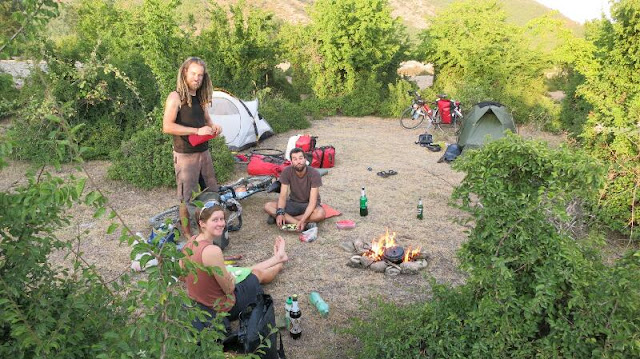 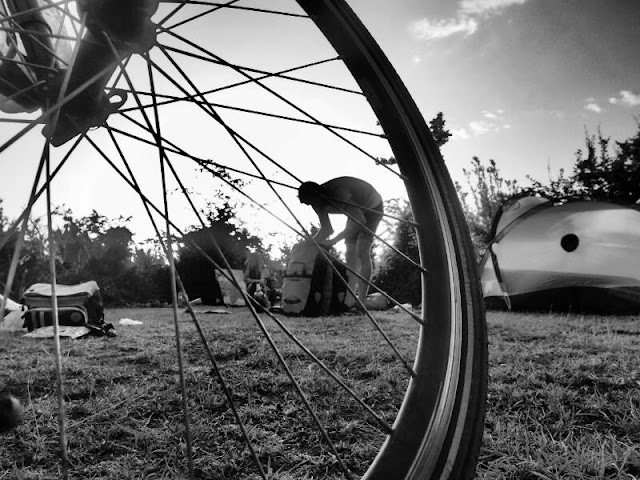 Azeri hospitality is legendary and when the most enthusiastic and energetic 15 year old kid invites you to his home, you have no other option but to accept. It was only the morning, so we had all day to talk, eat, shower and be looked after. We had just finished eating some eggs and Jules asked for some scrap paper to write a few Azerbaijani phrases, the father ran off to the shop and came back with a bag of pepper… He thought she wanted pepper for the food not paper to write. Just a small example of how kind and hospitable so many people in this country are. 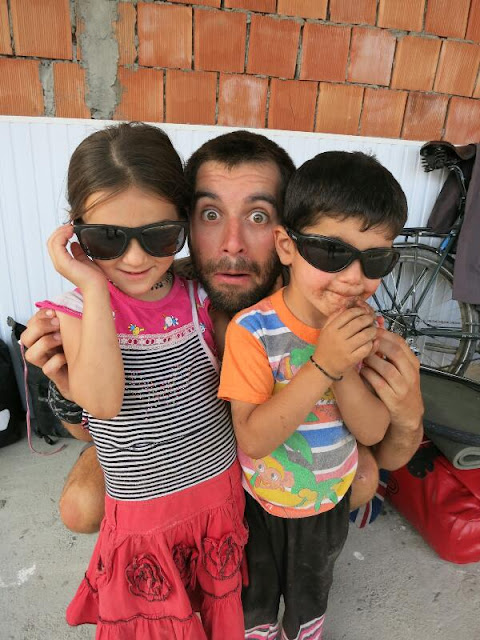 Azerbaijan was never an intended country of travel on this trip, I didn’t really know much about it to be honest. Here are a few facts and observations that might give you a better idea of this fantastic country: 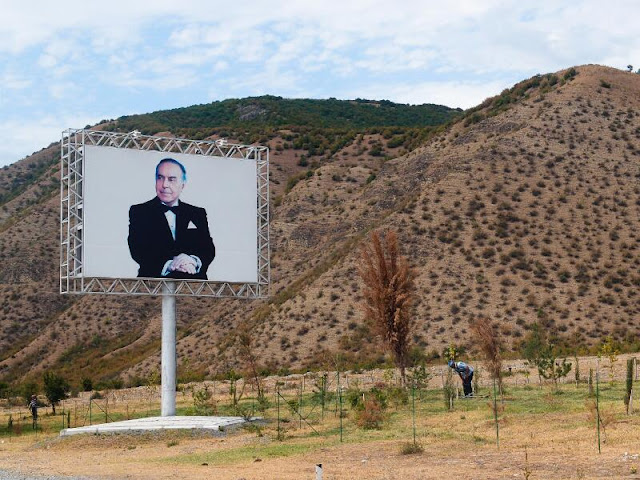 It was a hot day. Lots of people were calling us in for a pot of chai but we were either travelling too fast or saw their calls too late. The next person who calls us over, Mark and I decided, would get the pleasure of our distinguished company. Fast forward four hours… I drag my head off the dry grass and see the horror before me, 3 perfectly circular piles of vomit and a comatosed Mark. Rewind…. It turns out Azerbaijan isn’t as conservative as I was led to believe, our new friends were having a boozy Saturday afternoon and we had just found ourselves in the middle. I wish I could tell you all that happened, I really do, unfortunately the 2 bottles of vodka and several strong beers meant we’ll never know. The bits that I do remember will have me chuckling for a few weeks at least… Mark sipping from the table, vodka that cost $100 a bottle, passing out in a beer garden full of respectable looking people and maybe even a family or two. Out of nowhere it was dark, I was handed a shovel to clear up the sick and we could camp at the bar. Pitching the tent was a masterclass in concentration and falling over. Every time a peg went in, I would stumble over it and start again. Eventually the tent was up and I fell in fully clothed and wearing a lot less dignity than when I started the day. I awoke with a headache worthy of 20 pints, a mouth as dry as Ghandi’s flip flop and a tent-full of shame. 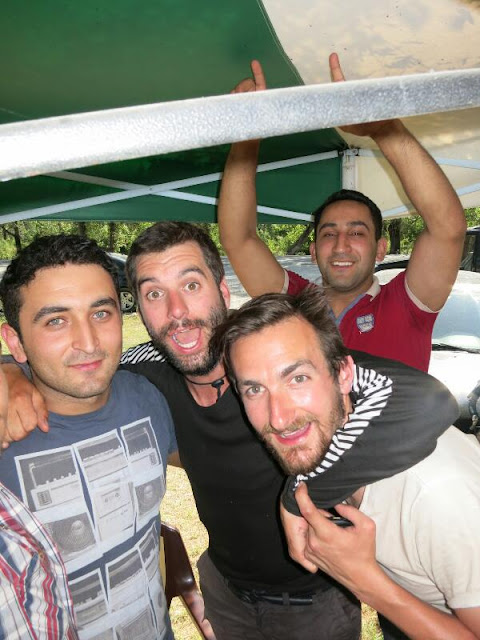 When we finally surfaced the boss came over with a stern look on his face, I had a bad feeling. He did lots of waving and talking in Azerbaijani but finally cracked a smile, thankfully he found our escapades funny, particularly Mark had falling over 3 times while trying to ride his bike. Not big, not clever and I’ll be trying to my best not to get in that state again. Vodka was a bad choice. 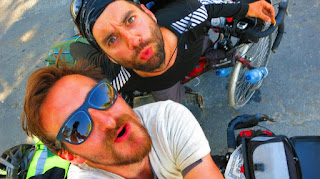 Cycling when feeling like death is difficult, cycling with a hangover like this is near impossible. We made it 5km before collapsing in a bush, then another 10km before a small hill had me sweating like a pig (not a good thing to be in a Muslim country). It was here that a car stopped and out walked four foreigners, one of which we knew. We had met Anna randomly in Tbilisi, she was living in Baku working on the European 2015 games. We had given her our email address, but technology failed us and instead we relied on old-fashioned good luck. Anna very kindly offered to see if they had any room for us to sleep at her place, little did we know at that time. 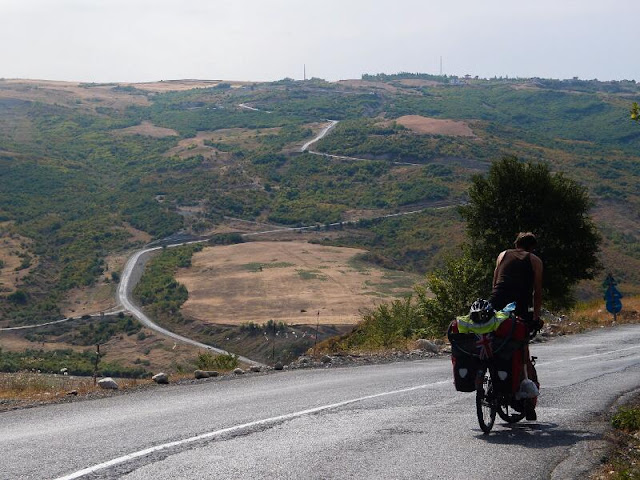 Before Baku there was still a few hundred kilometres. The road had been largely flat so far and I expected much of the same. The last 100 km looked like desert on the map so I expected this would be hot, but easy. It turns out you get big hills in deserts as well… Oh bugger. It was hot, windy and hilly. A tough journey into the capital but rewarding and the real reward was waiting for us. 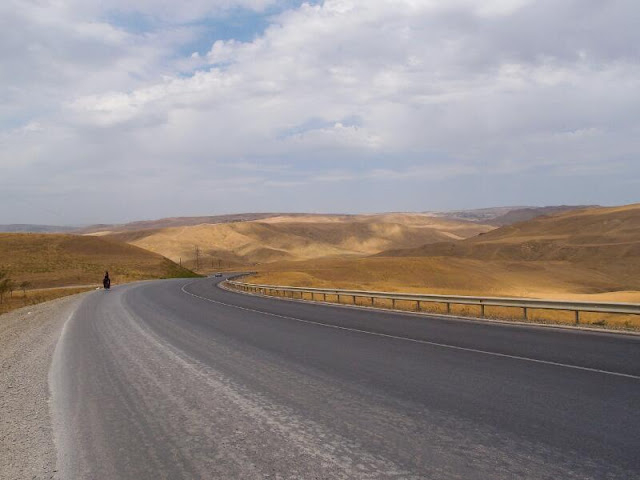 It turns out Anna did have room for 2 sweaty cyclists – in the 5 star Hyatt Hotel in Baku! I felt extremely out of place walking into the elaborate foyer, but the employees couldn’t have been more helpful, even called me a “hero” for cycling all the way here ha ha. It’s amazing how lucky you can get. And I’m here now. Sitting next to the outdoor pool in the 35 degree heat, enjoying the finer things in life. Feels like a world away from sleeping under the stars in a desert. Thanks so much Anna, Ashley, Greg, Sian, Kajal, Cat and everyone we met in Baku. 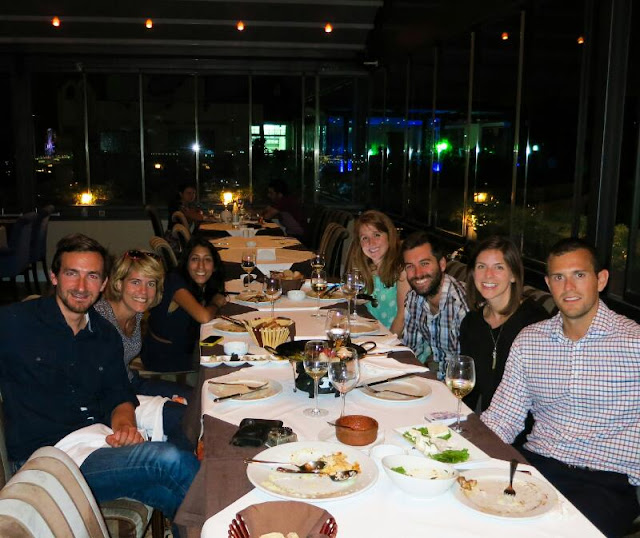 It’s been a roller coaster of super nice, generous people and beautiful air conditioning. Visas are nearly in the bag and then it’s time for a boat across the old rich Caspian Sea, then Central Asia to meet a few ‘Stans!