A great nights sleep on the cafe floor, despite a few flies enjoying my face all night. I can’t really blame them though, if I was a fly I would probably have enjoyed the stench emanating from my body at that time.

So much has happened over the past few days and I can’t mention every amazing person I’ve met, but there have been many encounters and each one could be a story of their own.I arrived in Canakkale with the intention of cycling south alongside the coast. However, after buying a map, I saw a small road heading into the hills. I went to the tourist information and asked him about it, he said there would be no traffic and loads of forest. Sounds good. 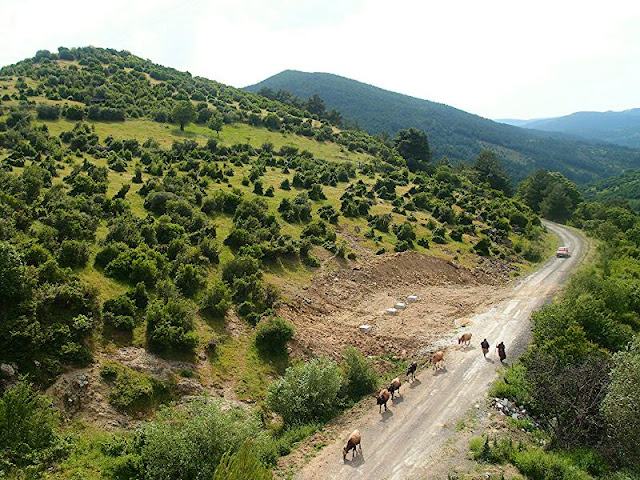 There was hardly any traffic but unfortunately my old friend was back with a vengeance… Headwind. Combine that with bad road conditions, lots of hills and it was hot, hot, hot. I was struggling. As I climbed higher, the road cut through the tops of hills, these hillside walls to either side of the road created a wind tunnel and more than once I was forced off the road, just avoiding a crash. When the wind really picked up, the worst thing was the mini sandstorms causing me to take cover from the dust pelting in my face.That night I camped in a small field within a village. The wind picked up even more and there were some curious moments where I felt my tent might not make it through the night. A few wet corners in the morning, but not nothing serious. 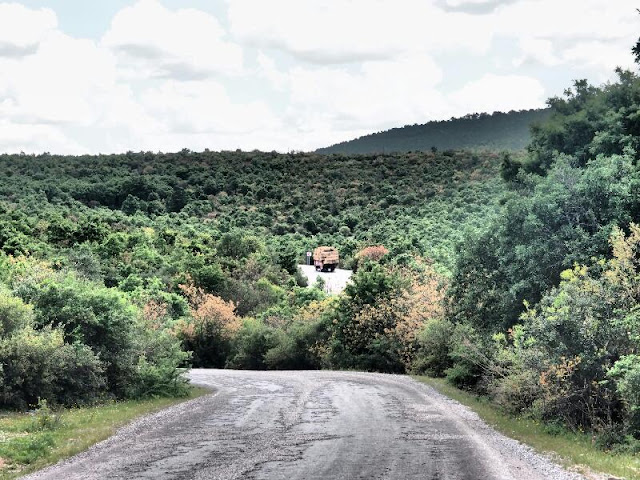 The next day would be the start of so much random kindness, it blew me away. After a short ride, but up a big hill, I was knackered and thirsty. I also needed some internet to look for hosts in the following days. Although I was in a very small town, I stumbled upon a cool cafe with Internet. Possibly the only guy in town who spoke conversational English just so happened to own this cafe as well. We chatted over breakfast then I met group after group of lovely students, happy to try out their English and teach me a little Turkish. The rest of the day was a whirlwind of tasting everything in the market, eating all the fast food in town and meeting great people. Despite my offers, I was not allowed to pay for a thing. This is something extremely common here I Turkey, if you offer to pay you almost get shouted at. I’ve seen friends practically fight over who pays the bill.I love it when you get lucky, and the next day lady luck was shining on me. Around 7pm, after taking little country roads, I arrived at a small village, pretty much in the middle of nowhere. I pulled up my bike next to a chai shop and was immediately ushered up. I ended up staying for 3 nights. 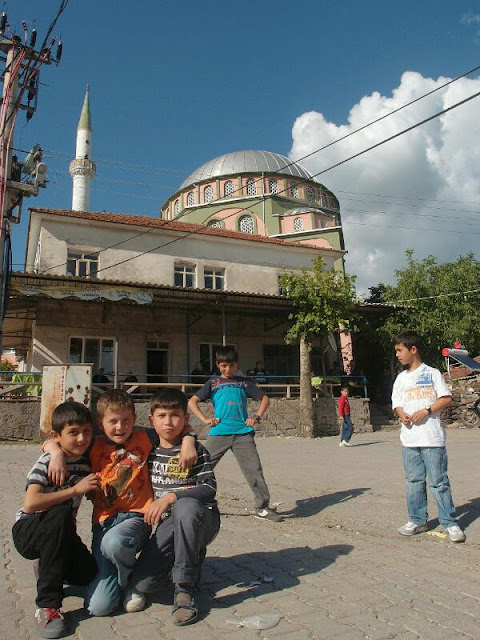 The reason I was lucky is because the next day was a village wedding. I was told I must stay… this is what travelling is all about. The wedding brought guests from outside the village and the holy grail in Turkey… English speakers! If I has arrived at any other time, my communication with these amazing people would have been severely lacking, that made me feel lucky. 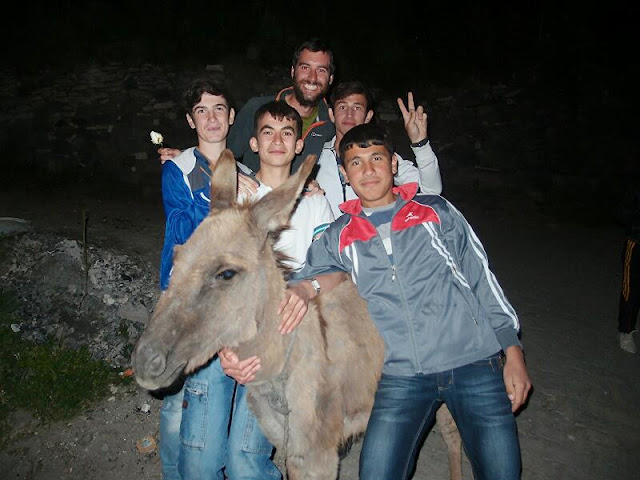 When I arrived I immediately had a crowd around me, within 5 minutes I had a bigger crowd and later that evening it felt like the whole village was surrounding me taking it in turns to ask questions. I can’t describe this feeling, it was like something you see in a documentary, it certainly didn’t seem real at the time. 5 year olds to 80 year olds, everyone was fascinated and so curious. I’ve experienced negative and positive curiosity before, but this was like nothing I’ve ever seen. Every single person was so happy to see and meet me, there was not one person in the entire village that didn’t great me with a smile. I had found paradise. 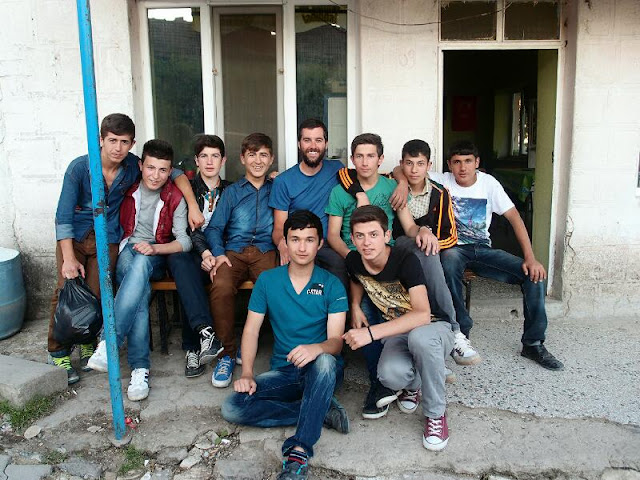 The next day was the wedding, I didn’t know what to expect but it far exceeded my expectations. It was actually a two day affair, with an evening event then all day celebration in the sunshine the next day. Very different to an English wedding, the focus is on dancing rather than getting drunk and following ancient traditions, some of which are village specific. Pictures can tell a thousand words and thankfully that’s the case, as my words won’t do this place justice. 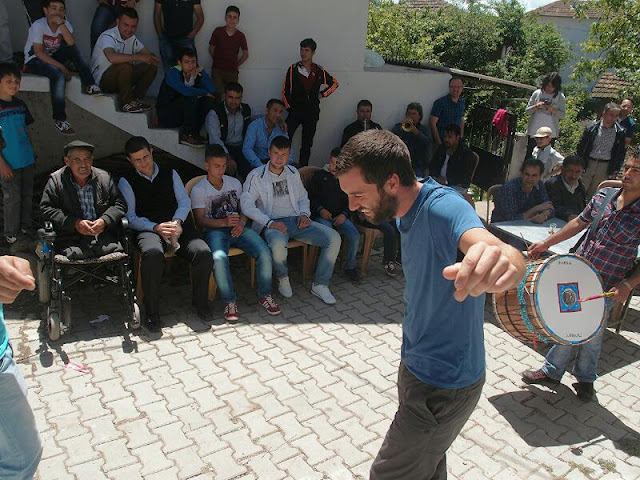 The wedding here is nothing without music. And once the band got going, so did the festivities. The traditional Turkish music consists of a clarinet, a trumpet and 2 drums. The music has a tribal feel to it and the various dances match the beat, it’s the type of sound you can’t stop moving your feet to. Unfortunately I can’t upload videos to YouTube so the sounds will have to wait. 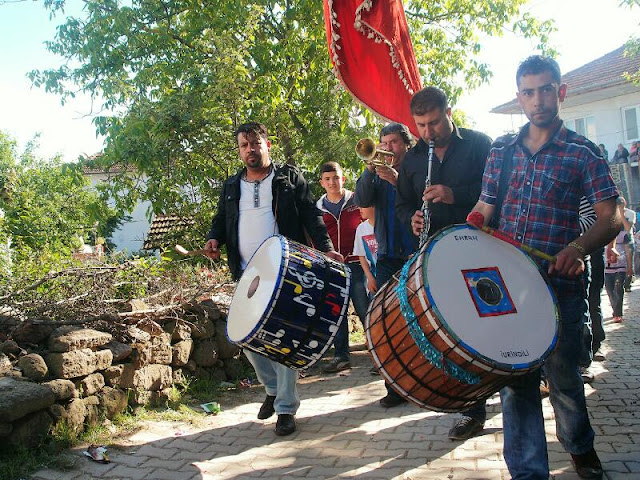 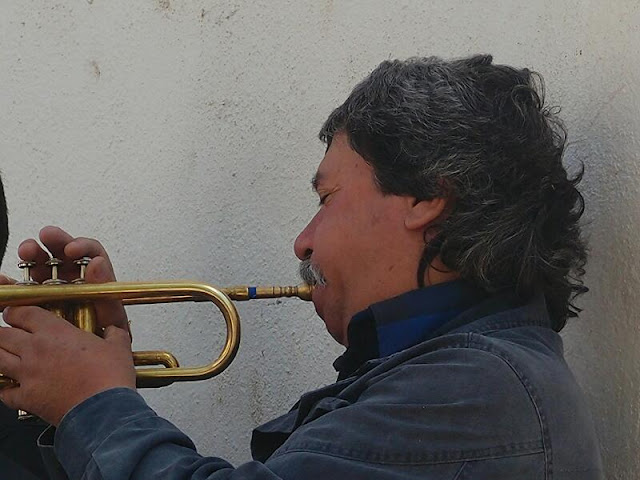 Throughout the day there were loads of processions around the village, with the music a constant presence. One of these walks was led by a line of men with shotguns, they walked to a shooting ground where they would take aim at targets and attempt to knock them off. 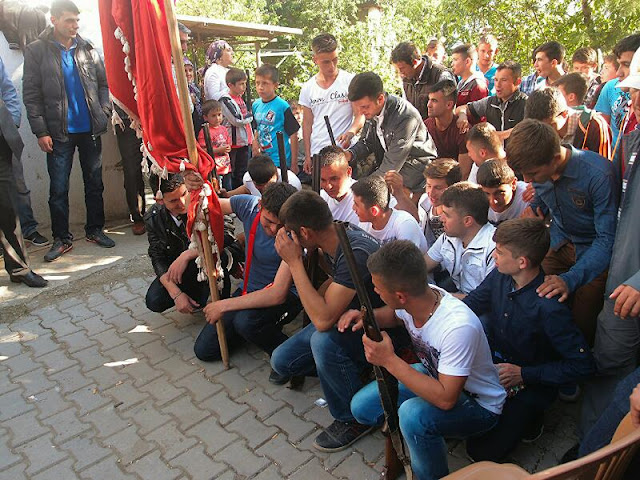 With a real party atmosphere all throughout the day and with everyone desperate to have their photos take, I tried my best to capture the colourful dresses and cute children milling around. 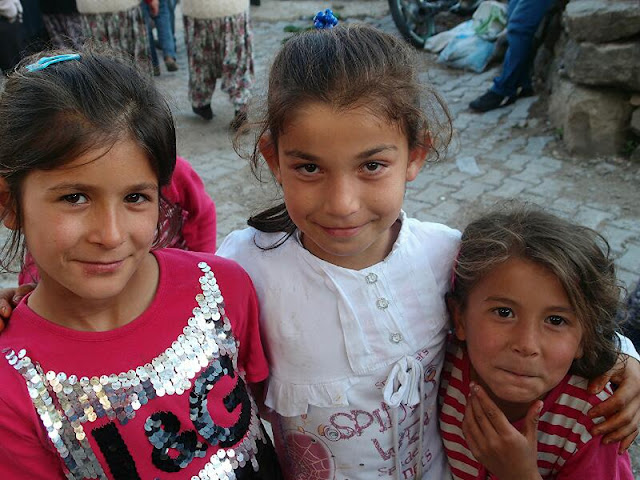 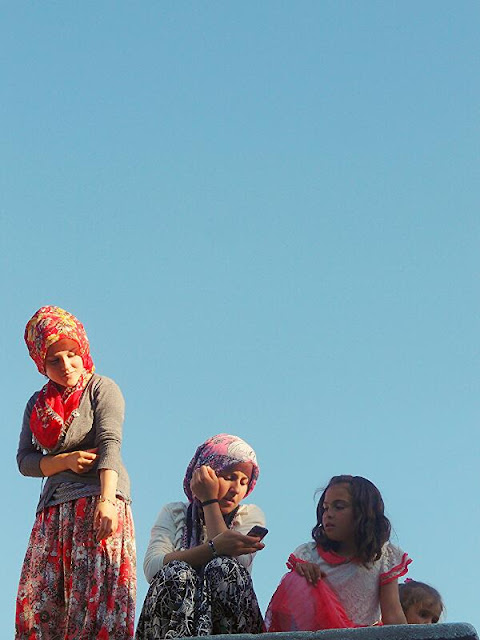 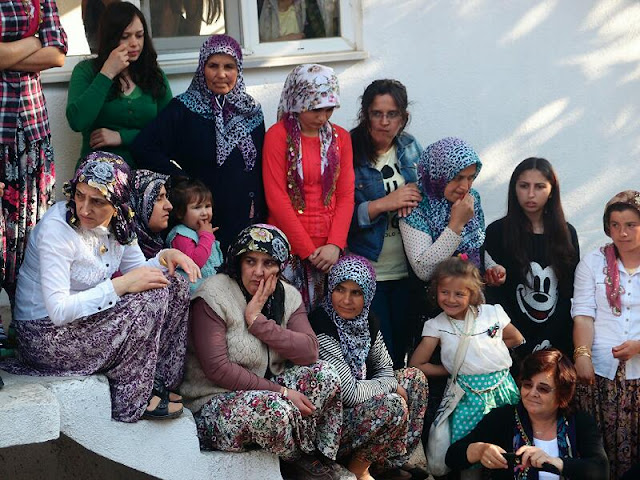 Later in the day, I witnesses the most bizarre ritual at the wedding. Taking place down a narrow streets (all the streets were narrow), on one side were the young men of the village, and on the other, the groom (and some unfortunate people behind him, who happened to be women!). The men would throw hard sweets as fast and ferociously as possible, the groom would try and defend himself, while the kids were running around collecting the stray candy. After all the sweets had been exhausted, the men would shake hands with the groom then as a passing gift would smash an egg on his head ha ha. 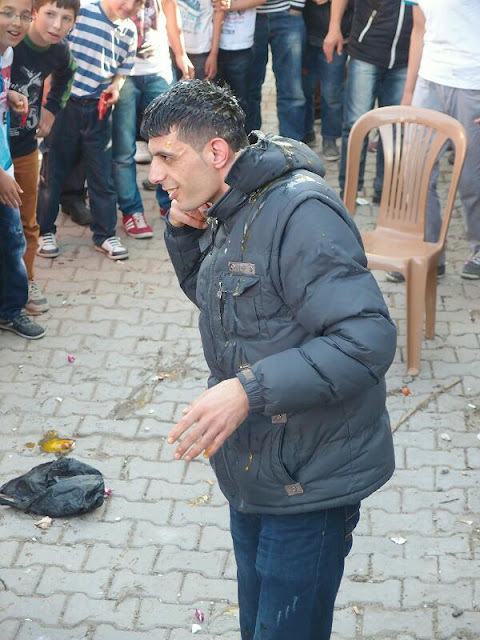 My experiences at this wedding were simply amazing. I was told after the wedding I was extremely lucky to see this celebration and even more so to actually be a part of it. Usually only the village members can perform the dances and rituals and I felt so privileged to be welcomed in this way. 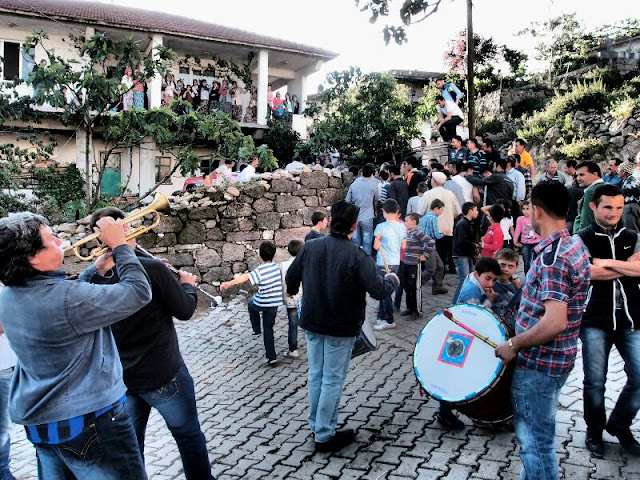 I turned up to this village unannounced, a sweaty, dirty foreigner on a strange bicycle. The people of this village welcomed me like a member of their family, gave me a place to stay, a shower, more food than I could eat and far more chai than is humanly possible to drink. I had nothing to give but I received so much. It really was a once in a lifetime experience, only made possible by a bicycle and choosing the road less travelled. 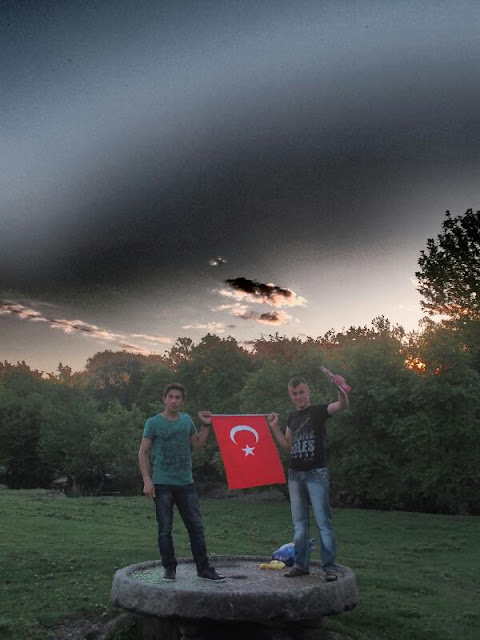 A huge thank you to everyone that made my stay such a positive one. Such positive, happy and caring people you could not wish to meet. And a big thanks to Mustafa for all the translating!